Say No Podcast: S1EP1 With Peter Czapp (Co-Founder of The Wow Company & The Agency Collective)

By The Agency Collective February 10, 2020 No Comments 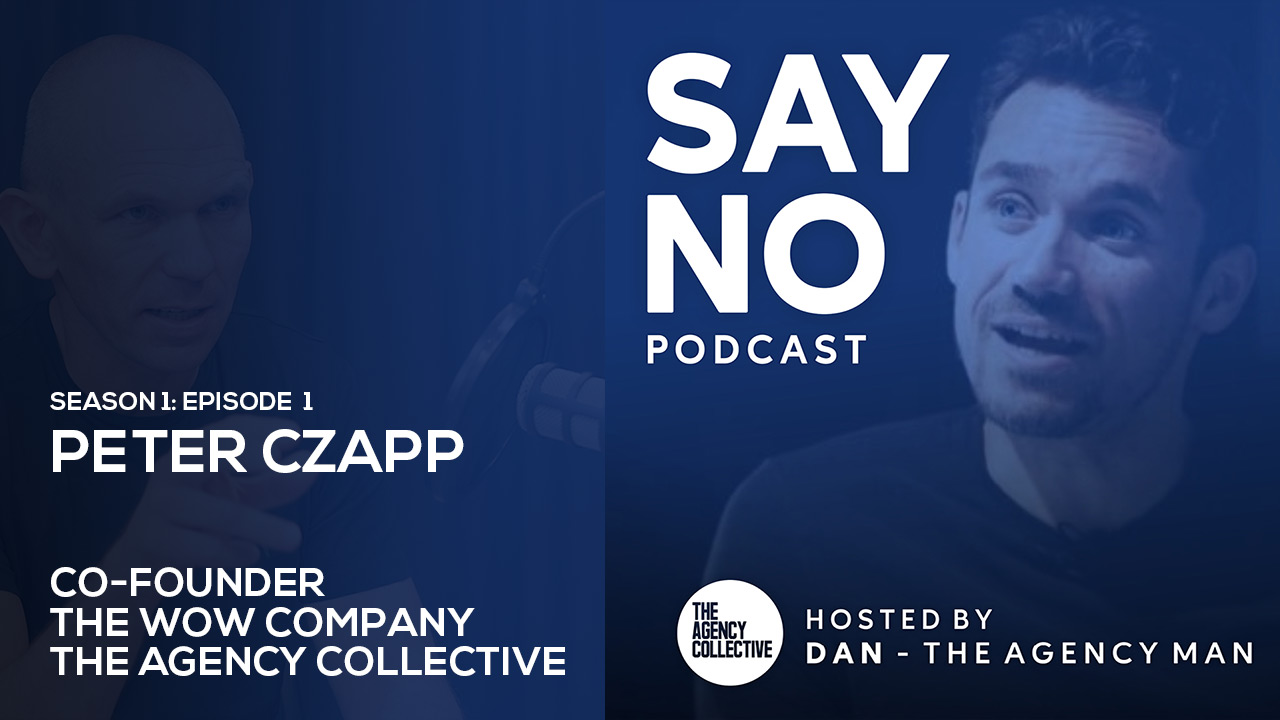 15 years ago, Peter Czapp set out to disrupt the accountancy world, a space traditionally associated with numbers and generally not the most exciting, setting up the UK’s first accountancy for agencies, The Wow Company, with the aim to making work with accountants more approachable, fun and easy to understand. Now specialising in agencies, Peter’s helped thousands of agency owners, including many of our members thrive.

Peter is also behind the BenchPress, which is now the largest benchmarking survey of independent agencies in the UK. We talk about the insights we uncovered in the last report, benefits of specialisation, and what next if you are looking to specialise or are already a specialist looking to capitalise on your expertise.

And the anecdotal evidence came from the hundreds of accounts that Wow produce for agencies each year. It came from stories that Pete used to hear from our members here at Agency Collective around those that were growing quicker and that were doing better tend to be the ones that were more specialist. Looking at the benchmark data from nearly 1000 agencies now across the UK, Pete discovered a trend towards agencies becoming more specialist or to be specific, using more specialist terms in the way they describe them themselves.

Last year, 40% of agencies described themselves as generalist. This year that figure dropped to 29%.

If you’re a specialist agency, you will grow quicker than if you’re not. The second thing is that they’re more profitable.

In fact, 40% of specialist agencies grew their turnover by more than 25% last year.

Nearly half of specialist agencies had net profits of 25% or more.

In terms of the data, what’s the average net profit percentage for agencies? This changes as agencies get bigger.

Because as agencies get bigger, the percentage or the amount of overheads, the amount they’re spending on overheads increases. Gross profit tends to increase as you get bigger, but net profit as a percentage tends to decrease. Pete compared the data like with like and across those two sample sizes, one were specialist agencies and one were generalists, the specialists came out as clear winners of net profit.

For the purpose of this whole series that we’re creating and everything that we’re going to be sharing, this is mainly relevant for independent agencies and ones that are under £5M turnover.

Sales & Marketing as a specialist

The agencies that do really well on this, that really know their specialism, what we see them doing well:

Chris Donnelly from Verb Brands is a specialist in the luxury sector.

They have an incredible focus when it comes to their brand positioning, sales, marketing, the qualification of their clients.

Stick to your knitting.

No one’s ever going to win an award and stand on stage and say: “Look, the secret to my success is that I was a generalist. Honestly, I’m so successful. The reason I’m successful is because I picked up any client and did absolutely anything for them.”

That’s never going to happen. All of these successful agencies that we’ve seen are really focused and it helps them pick up clients because if you can be really clear about who you want to work with it becomes easier. It’s really hard – almost overwhelming – if you are a generalist. Who could you work with? Anyone. Where are they? Anywhere. Where do you want to start with your marketing? And it just becomes overwhelming, too big. By narrowing that focus, it helps you in terms of the ability to pick up clients.

Pricing as a specialist

Another area that is affected positively by specialising is pricing.

A lot agency are finding it challenging right now in terms of getting paid for what it is that they’re worth. There’s been a lot of talk about charging for the value that you’re giving to clients. As opposed to having a price knocked down by the client. That’s really hard, almost impossible if you’re a generalist agency because you’re a commodity. They can go and get that from elsewhere. But if you’re a specialist, that pricing conversation suddenly starts to flip around.

Get to a point where the client can only buy what it is that you have to offer from you.

You can start to charge what you want. The research Pete and Wow conducted revealed that agencies who charged more also were more profitable. That can get reinvested into becoming a true specialist e.g. hiring people and having funds for R&D.

The value of your agency increases

If at some point in the future you are thinking about selling your agency. Or at least you want to build an agency that gives you the option of doing that. We love the Blair Enns philosophy about building a business that you work in forever, but it’s good to have options, right?

If you decide you do want to exit, there’s not going to be an acquirer out there that’s going to write in their strategic plan that says:

In some instances companies will buy generalists. This is to boast their portfolio. If you are running a full-service agency with a healthy profit margin. The business is definitely sellable. But it might not be as high in demand as a specialist agency turning over the same amount, with the same level of profit. Because your IP adds value.

Also please note that often companies by other companies just for the parts they want. That means they may strip out what they need and divest the departments they do not need. Is that what you want to do to your team?

Whereas a company buying you based on your IP. They will magnify your business.

Where do I start? There’s often a psychological barrier to this. When people think about niching, they think about closing off their market. They think they’re going to have fewer opportunities. Instead of dealing with everyone everywhere at anytime, they’re only going to deal with a small sector of a market. Actually what happens is you end up creating more opportunities. Through that power of focus, you’ll create this abundance mentality everyone wants to come to you over time, if you get it right.

This agency only worked with hedge funds within a certain square radius in London. There were only 100 potential clients. They pursuit their mission of doing a very specific thing for these guys. They absolutely cleaned up, because they knew who their clients were. They were very tight geographically. They were very tight as a community. And they didn’t need the whole market. They only needed a handful of them, who would then recommend them to the rest.

You only need more than two. Have you got more than two companies to target in a particular sector that you could start to build that around? And if you’ve got more than two in several different sector, which one are you going to go after? It’s not just the profitability that you should look at. You should also look at how tight knit that community is. The closer it is the more likely they are to refer suppliers to each other.

Is your team on board?

Who does your team like to work with. Is that a good match for the type of services your potential clients would buy from you. Does everyone believe in what you do? Is the team going to enjoy working with them? It’s not just about profit. That should be a consideration, but it’s not the only one.

If you’re starting to explore niching, then have a think about who you work with already. Pick one and go for it. Start organising some events in that sector. Start writing some content for that sector.

It’s easier than you think. You can get your existing clients together and use them as a catalyst for this new community. Research who the key influences in that sector are.

Pete talks about a Wow client who a few years ago was very much a generalist. They were charging £40 an hour. That’s well below the industry average. Their motivation was to increase their prices. At the time they were doing websites for £1,500 for local businesses. Finding it really hard to make money. They decided that their passion was around internal comms. They also had good experience in the niche.

Now focussing their communications around internal comms. They found a couple of niches within internal comms, which they targets. They gradually increased their rates from £40 to £50 to £60 and over three years went to £150 an hour.

They were inspired by the concept of BenchPress – a sector report. They ran a survey on employee engagement. Rather than just sending it out, they wanted to amplify the marketing. Contacting all the key influences within employee engagement and internal comms: “We’re going to run this survey and we’d love to know whether you’d like the opportunity to add your questions to the survey. If yes, what would your question be? They all responded immediately. After the first draft was produced, they it to the influencer. Asking them whether they have suggestions for improvements. Getting them involved in the process. When they asked whether they would mind to send it to their friends, almost everyone complied.

Now they have all of these people with all of their contacts sending it out to their databases. The answers come back in. They create an amazing report. To take this to the next level they sent the next version of the report with the answers to the questions by the participants. Asking the influencers whether they would like to comment on the answers. Of course they do. Now the report is filled with indirect endorsements from all these influencers in that niche.

Now all of a sudden people were contacting them and asking for their opinions. It changed everything for them.

Agencies who are already niche specialists

The challenge Pete gives to everyone listening to the podcast is to think: “What could I be the best in the world at and what would need to be true for that to happen?” Then rate yourself both for sector niche and for skill niche out of 10 – a simple scoring system. How would you rate yourself in terms of your journey to being best in the world? And then what’s the next step you could take on that journey?

Ask yourself that question every six months and take the next step on that journey.

What is the next level for you?

Sushi master – Jiro Ono – in Jiro Dreams Of Sushi, opened the first Sushi restaurant in Japan to be awarded 3 Michelin Stars. Even at 94, Jiro, still continues to find ways to perfect the making of his Sushi. He comes into the restaurant every single day thinking: “How much further can I perfect this little tiny bit of tuna that’s going to go on this piece of rice? How do I position it? How do I make it look great? How do I make it taste great?

When he works with suppliers. He doesn’t work with generalist fish mongers. HE works with the company that sells nothing else but Yellow Fin Tuna. This supplier has been doing that for the past 40 years.

Check out the full podcast episode with Peter Czapp & DanTheAgencyMan

Listen to the episode